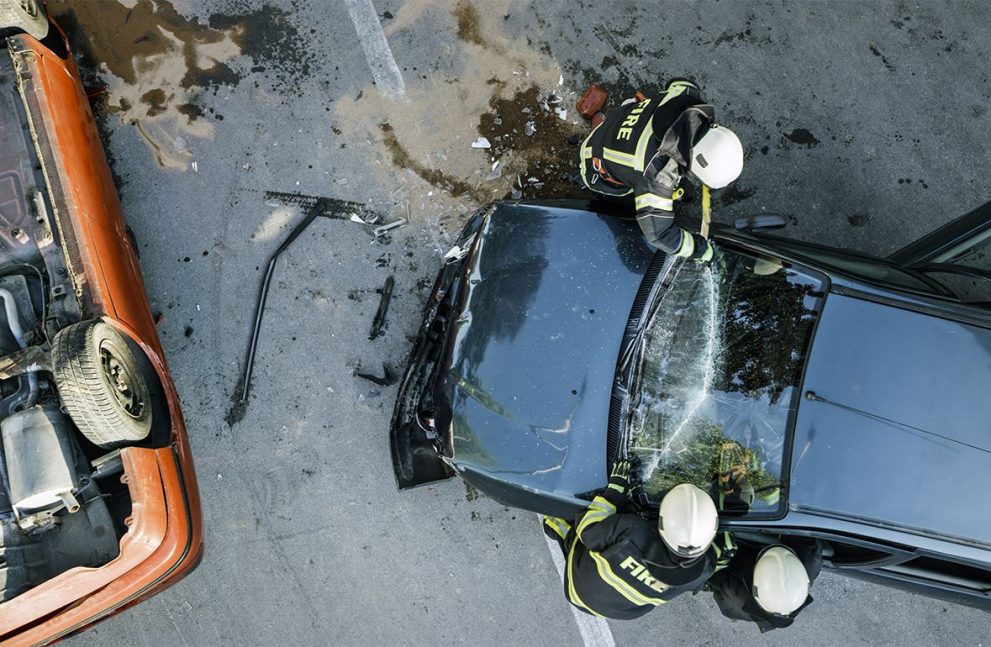 If You’ve Suffered a Motor Vehicle Accident in Rockford, Get a Consultation ASAP

Get help from a skilled Rockford car accident attorney who will protect your rights when you or a loved one is hurt or killed in a motor vehicle accident. We protect individuals in any of the following motor vehicle personal injury cases:

The most common type of personal injury claims involve motor vehicle accidents. This is not surprising since the National Highway Traffic Safety Administration (NHTSA) estimates that a traffic accident occurs in the United States every ten seconds, and the rate of auto accidents in Rockford is no exception. Accidents can happen in only a few short moments, but can have long-lasting effects on your life.

What Should I Do if I’m Involved in a Car Accident Near Rockford?

Illinois has more than 400,000 car accidents every single year. These include 90,000 injures and around 1,000 fatalities. Even a minor fender bender can result in a trip to the hospital, lost wages, soft tissue damage, and the inconvenience of losing a vehicle for a period of time. If it’s a major car accident, it can have life-altering consequences for yourself and your family well into the future.

Every driver has the responsibility to drive safely for the sake of others on the road, their passengers, and themselves. Despite the many technological advances that enhance motor vehicle safety, more accidents occur every year. Failure to drive carefully leaves drivers responsible for any consequences of resulting accidents. If they injure someone, they are obligated to pay for it.

Despite the risks, and even when faced with the possibility of so much loss, people continue to make risky decisions when behind the wheel. According to data evaluated by the Insurance Information Institute, the following types of driver behavior are commonly involved in severe car accidents:

The Illinois Department of Transportation records indicate that 1,097 people were killed in car accidents in 2017. 1,017 people were killed in auto accidents throughout the state in 2016. Cook County saw the highest number of collisions, fatalities, and severe injuries compared to any other part of the state, with 211 deaths and 27,075 reported injuries, of which 3,223 were deemed significant. Meanwhile, in the same year, more than 40,000 people across the United States were killed in traffic-related incidents. According to assessments made by the National Highway Traffic Safety Administration, motor vehicle accidents amount to a massive $871 billion in damages each year.

The NHTSA has determined that distracted driving accounts for 25% of all crashes involving teenage drivers. This was affirmed by the U.S. Centers for Disease Control and Prevention (CDC), which reported that drivers under the age of 20 are at the highest risk of distracted driving-related crashes.

We all know how connected teenagers are to their phones. In many cases, this connection continues when teenagers take to the wheel. A study released by the CDC in 2011 revealed that nearly half of all American high school students aged 16 and over texted or emailed while driving. That study also showed that teenagers who text while driving are almost two times as likely to get in a car with a driver who has been drinking. These teens are also five times as likely to drink and drive under the influence.

In 2013, almost one million teenage drivers between the ages of 16 and 19 were involved in motor vehicle crashes. These accidents resulted in 2,865 deaths and 383,000 injuries nationwide.

Mobile phone use (e.g., talking, texting, or searching for information) was implicated as a cause for 12% of teen accidents. In more than half of the rear-end crashes involving mobile phone use, the distracted teen driver had no idea he was about to be hit.

While there is no denying the impact of an injury or loss of life caused by an accident, we are committed to making the legal process that follows as stress-free as possible. We understand that the trauma of a motor vehicle accident itself is difficult to shoulder, and are committed to relieving your anxieties about a legal battle. We fight for our clients and their rights to recovery.

According to Illinois Department of Transportation data 84,652 people were injured to some extent in a vehicle-related incident in 2014. 11,755 of those individuals sustained a significant injury that prevented them from participating in the normal day-to-day activities that they enjoyed before the accident. This is categorized as an “A-type” injury crash. Some of these life-changing injuries include:

Regardless of the scope of your injury, we can help you. We understand that no accident is the same, and will treat you with respect and individualized attention from your consultation and beyond.

So what happens if an uninsured driver causes a crash that injures you?

Recognizing how pervasive uninsured drivers are, most automobile insurance companies offer uninsured motorist coverage (often referred to as UM coverage). In these situations, after it has been established that the at-fault driver did not carry any insurance at the time of a crash, a claim may be presented to the injured party’s insurance company, which essentially stands in the place of the person who caused the accident.

While the logistics of presenting a claim to your auto insurance company for an accident that you did not cause may seem strange, you are entitled to the same types of damages that you would have had the offending driver carried insurance.

On a similar note, when a driver who causes an accident has insufficient liability coverage to compensate an injured party for their injuries — either an underinsured motorist claim or UIM claim — may be made with the insured party’s auto insurer.

Motor vehicle accidents are governed by the law of negligence. In general, drivers must exercise “reasonable care under the circumstances.” A deviation from this standard of care may require the at-fault party to pay for the damages caused. However, who is determined to be the at-fault party is not always clear. This can quickly turn into a case of “he said, she said.” It can be difficult to know what actually happened and who is legally at fault. A consultation with a personal injury attorney can give you a clear and unbiased opinion of liability in your case, and help you better understand your options.

Damages are the monetary compensation awarded to an injured party after an accident. They can include medical bills, pain and suffering, disability, disfigurement, permanent impairment, lost wages, property damage, etc. Consulting an attorney early on in your case is the best way to ensure that your damages have been properly documented so that you receive fair value for your claim.

If you have been injured in a car accident in Rockford, Illinois, or in a surrounding community, there are essentially two ways to recover compensation for your injury.

Illinois sets a time limit of two years to file a personal injury lawsuit in the state’s civil court system. In most cases, this two-year time limit, known as a “statute of limitations,” begins to run on the date of the accident. Sometimes, however, a statute of limitations might run from the date that you discovered you were injured, rather than the date of the event that injured you. This later date is known as a “discovery date.”

For injury claims against a city or county, you have one year to file a lawsuit. The time limit to sue the state is generally two years, but you must file a formal claim within one year in order to sue.

A qualified personal injury attorney can help guide you through this difficult time and alleviate some of the stress.

Have a Question? Call or Text Our Office

At the Law Office of Paul M. Marriett, we understand that car accident victims may have questions about their legal rights following a motor vehicle accident. We are committed to helping injured drivers, passengers, and pedestrians understand these rights and how they may be able to obtain compensation to cover damages such as medical bills and lost wages. Depending on the details of your crash, you may be able to seek compensation through insurance claims or a lawsuit against a negligent driver.

For a confidential, compassionate, in-depth, free, and, most importantly, thorough consultation with a Rockford Personal Injury Lawyer about your car accident case in Rockford, Belvidere, Freeport, Rochelle, Oregon, Loves Park, Byron, Machesney Park, Roscoe, Rockton, or elsewhere in the State of Illinois, call or text message us at (815) 391-0089, or e-mail us 24/7/365. We offer in-office consultations, and routinely make visits to clients’ homes, hospital rooms, nursing homes, and other off-site locations to make retaining our services as easy as possible.

Best lawyer I have ever had. Always on top of my case, keeping me updated. Worked with me on everything I needed and went above and beyond on my case. I would recommend him to anyone who needs help. He was phenomenal.
–Taylor T.★★★★★